Actor Cillian Murphy points to his experience in theater as training that prepared him for his mostly-silent role in the film. John Krasinski Remembers His Almost Disastrous Audition for ‘The Office’

At the audition, Krasinski he was a bit too honest about his love of the original UK version of ‘The Office’ ‘The Hollars’ is quirky and cheery, full of wonderful actors and a lead character that has lost his way in life and has a story that turns dramatic in the final act. John Krasinski on his “Lottery-Ticket Life”: “What I try to do instead is try to deserve to stay here”

“It’s so unbelievably rare to get the opportunity that I did to be on The Office, so what I try to do instead is try to deserve to stay here” – John Krasinski John Krasinski on His Directing Debut, ‘The Hollars’, and How He’ll Always Be an “Actor at Heart”

“To me, it’s not about comedy or drama or genre, it’s about, where’s the good story?” – John Krasinski Bradley Cooper’s Physical Transformation in ‘American Sniper’: “It changes the way you walk, the way people relate to you” John Krasinski on Adding Writing, Directing & Producing to His Resume: “All these other avenues have been fascinating roads to go down but, for sure, acting is the most fun”

It’s incredibly hard for actors on a long-running television series to find success in other roles — mainly because audiences want to keep seeing them as the character that the actor became famous for in the first place. As a result, it’s likely John Krasinski will have a difficult time being seen as anyone else as the affable Jim from The Office for the next few years… at least 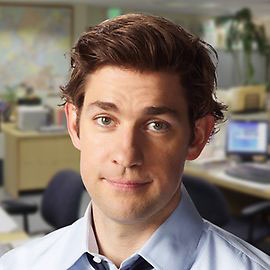 Q & A: John Krasinski Talks the End of ‘The Office’, His Audition, Past Commercials and More

John on the end of ‘The Office’: “It’s a life-changing event and there’s just no way to describe it” John Krasinski on the End of ‘The Office’: “No one would have known my name if it wasn’t for the show”

Once an actor has starred in a television series for a number of years it gets a bit difficult to see the actor in other roles — not just for audiences, but also for those who handle casting. Case in point, I saw John Krasinski in a movie this year in which he was essentially playing his Jim Halpert character from The Office with a different name. That’s not exactly the type of role that helps an actor grow.

Rosemarie DeWitt has popped up everywhere recently, from the indie Your Sister’s Sister to the comedy The Watch. Now, with her role in Gus Van Sant’s Promised Land, DeWitt is showing other actors how to take on a variety of projects. Though it’ll be difficult, if not impossible, for John Krasinski to shake off the public perception of him as Jim from The Office (plus he’ll have to get used to not mugging for a camera), Krasinski is certainly giving it a try as The Office wraps up its final season. Q&A: Showrunner Greg Daniels Gives the Details on the Final Season of ‘The Office’

Daniels talks about wrapping up storylines, finding out about the documentary crew and if Steve Carell will return

Watch: ‘And Introducing… Famous Faces in Their Film Debuts’

Here’s a cool video featuring a bunch of well-known actors in the very first on-camera roles. In a clip from the episode, available after the jump, Krasinski’s character starts a fight with a teammate after lying to police during a questioning.