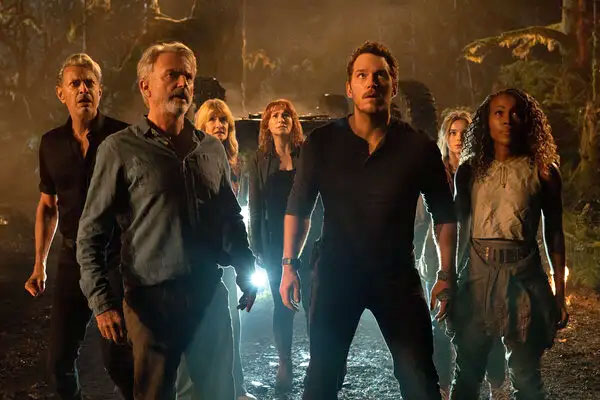 I honestly cannot remember a thing about the last two Jurassic World films. That’s not true. I do remember that part in the first one where Chris Pratt who plays Owen Grady corrals the smaller dinosaurs like a cowboy taming a horse. I do that to my kids sometimes. Anyway, it doesn’t mean that the films weren’t good, I actually quite enjoyed them leaving the theater.  They just weren’t the most memorable of films. However, I do remember, pretty vividly, most things about the first Jurassic Park directed by Stephen Spielberg.

The latest in the series, Jurassic World Dominion, is purportedly the last in this series so director Colin Trevorrow (who wrote the film alongside Emily Carmichael) has pulled out all the stops. Enjoyably so.

In the film, dinosaurs are now part of everyday life, living and roaming freely amongst humans, like ducks in a pond or wild horses sprinting through the planes. Or, more like lions and tigers. And bears. Oh my.

Owen and Claire (Bryce Dallas Howard) are still living (and haunted) with the events of the previous films, trying their best to help the creatures where they can. And they’re now looking after spunky 14-year-old Maisie (Isabella Sermon), who early in the film gets kidnapped because of her mysterious DNA.

Meanwhile, the OG cast (Sam Neill as Alan Grant, Laura Dern as Ellie Sattler and the scene stealing Jeff Goldblum as Ian Malcolm) is back, trying to take down Biosyn, a company led by Lewis Dodgson (Campbell Scott). It’s the kind of company whose mission statement says all good things but behind closed doors do things that aren’t. And they do lots of really, really bad things.

It’s almost two films up until the last 3rd of the movie. Owen and Claire, who go off to rescue Maisie, is all action and adventure, with some really fun moments including one where dinosaurs are chasing Pratt on a motorcycle throughout Malta. The OG cast is in more of a thriller, trying to piece together the puzzle of Dodgson and Biosyn. It does balance out the movie pretty well actually.

There are a couple of characters though who are a bit caricature, one so much so that it almost felt like they were in another film.

Another thing I like is the relationship between Owen and Claire. With sequels being what they are, you kind of expect them to be apart and angry at each other for something that happened before the movie takes place and they only get back together because they have to solve the issue at hand. Not here though. They’re still together and deeply in love, which I thought was a nice touch by the screenwriters.

But the real fun was watching Goldblum, Dern and Sam Neill’s characters together. Grant and Ellie haven’t seen each other in years and the way Neil slowly lets out his feelings throughout the movie is both funny and sweet. I do wish Goldblum had a bit more to do. Because, come on. He’s freaking Jeff Goldblum.

Pratt has some funny moments with the OG cast. And Mamoudou Athie, who plays Dodgson’s right-hand man, is really terrific.

But the real reason we see these types of films are the dinos and they mostly don’t disappoint. The new big bad here is called a giganotosaurus but he has so little screen time, we don’t fear him as much as we should. The effects are good and the chase sequences are a good ride. As summer movies go, you can do worse.

Share
Tweet
Pin
Previous ArticleGeorge Clooney on Directing Actors and Beating the Odds
Next Article Jennifer Aniston on Dramatic Roles, Typecasting, and How the Industry Has Changed