Home » Interviews » Josh Kelly on Soaps, Joining the Military and the Audition That Got Him the Job on ‘UnREAL’ 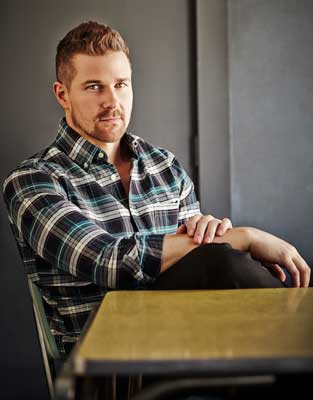 “I knew I loved action movies and I knew I’d always question the authenticity of me playing a character if I hadn’t actually tried to see if I could do it.” – Josh Kelly on Why He Joined the Army

Lifetime’s got a great new show called, UnREAL, a fictitious behind-the-scenes look at the craziness surrounding the production of a Bachelor-esque reality show. It stars Shiri Appleby as Rachel (a producer whose job is to manipulate her relationships with the contestants to get  dramatic and outrageous footage), Craig Bierko, Constance Zimmer and Josh Kelly as Jeremy, a cameraman who is Rachel’s ex-boyfriend.

Josh, who you may have seen as Cutter Wentworth on One Live to Live, is an Army veteran and didn’t really begin his career till he left the military. After that, he moved to LA, trained for a year and has pretty much been working ever since. I talked to him about UnREAL, how he got the part, why he joined the Army and his time on One Life to Live.

Can you tell me about your character?

Josh Kelly: He’s a hard working guy who wants to be in love but wants it to be right. He doesn’t really want to be doing the job that he’s doing but you know, everyone needs a job. He’s just a good guy.

Did you talk to people who worked behind the scenes of reality shows to get the idea of what was going on?

Josh Kelly: I spoke with a couple friends that worked in post-production in reality and worked in the production side of reality and just kind of talked with them about things.

But then it gets down to just being able to do the job. I read a couple cinematography books and I had worked a little bit behind the scenes before and our crew was always really helpful if I had any questions. And I pretty much told them, if I’m ever doing anything and I look like an idiot, just let me know that that’s not how to do it.

I don’t know if it’s still there, but there was a giant billboard of you naked on the Sunset Strip promoting the show.

Did you know that was going to be there?

Josh Kelly: Not really. Lifetime normally uses that billboard space. It’s on the same street as my girlfriend’s house, so it was kind of funny because she had to drive past it every day.

When you know you have to do something like that, are you working out like a beast right up until you have to shoot?

Josh Kelly: I believe they kind of came up with the idea on the spot. But, when I got to Vancouver, I wasn’t in as good of shape as I would have liked. And then, Freddie [Stroma], the guy who plays the Suitor, he’s in really great shape and so I started working out when I got to Vancouver. And luckily, it wasn’t till late on in the show where I ever had to take any clothes off. And we shot the promo stuff afterwards, I had been working out for a while.

How did you get your role? What was your audition like?

Josh Kelly: I went in and I did the read and then as I was leaving, I made like a little joke. A cheesy little pun joke. And then they called me as I was walking to my car and they asked if I could come back. And they said that the liked what I did but if I could do maybe more of that… maybe just be a little more like me. I was like, “Yeah, I can do that.”

That actually is a big challenge for a lot of actors. A lot of actors have a hard time kind of playing natural. It’s easier to do a character a lot of times.

You were in the military for a while.

Josh Kelly: I was. Not too long, like four years.

Before you went in, was it your goal to be a working actor? I know you did theatre when you were younger.

Josh Kelly: Yes, that’s always been the plan ever since I was three years old.

The Army was kind of a… I kind of felt like I needed to grow up, become a man in many ways. And if I didn’t do it then, I knew I wasn’t going to do it after theatre school, after going to college and getting a degree in theatre. So, I decided to do it right then.

And part of it was because I knew I loved action movies and I knew I’d always question the authenticity of me playing a character if I hadn’t actually tried to see if I could do it. I joined before the war so I didn’t know we were going to war or anything.

When you left the military, did you go to school or did you just move right to LA?

Josh Kelly: I moved to LA and I got real good advice from a friend of mine who said, “Make sure you’re ready before you start auditioning. Once you get in there and you burn a bridge, you never know if you’re gonna be able to get back.”

So, I studied for a year when I got out here at a variety different acting schools and classes. And then I felt I was at least ready to start trying. And I started auditioning.

What was the first job that you got?

Josh Kelly: I was on a show called, Desire. And it was when the WB and UPN combined and they created CW. It was a prime-time telenovela. It was a really good experience, yeah. It was fun because I had such a small part that I could watch. So I watched and learned because I was technically a series regular even it was really like a recurring co-star.

Then you got a really nice role on One Life to Live. You were on there for a couple of years.

Josh Kelly: Yeah. I did the last year when it was on ABC then I did the reboot when it went to Hulu. And that was an amazing experience too. That was so much more fun than I thought it would be. And I learned a lot and I’m still really good friends with a lot of those people.

I would think doing a soap is the best acting school around. Getting thrown into the fire, memorizing all that dialogue the night before for your scenes the next day. I’d think it would be great.

Josh Kelly: Yeah, I loved it. And I would have continued to do the character on that show but I really like being able to do other projects. I like doing prime-time TV and I like doing movies and unfortunately when you’re on a soap, you really can’t do much else.

Yeah, you can’t do anything. Do you get any time off? You’re working the whole year.

Josh Kelly: you had two week vacations. Like Christmastime and Thanksgiving I think? But the most you’ll ever have is two weeks.

Josh Kelly: Yeah. But, that’s why people stick with it. It was really neat getting to experience that. They would drop their kids off at school and then come to work, they’d been doing it for 40 years, you know? They’d be home for dinner, every day.

So far, what’s been the worst audition you’ve ever been on?

Josh Kelly: Ha. The worst audition I’ve ever been on. When I was first starting out… there have been a couple doozies. I think one of the most embarrassing memories, it was some show… it was like an action show. And I didn’t know I was gonna have to do this but my agent had told them I knew martial arts. I was like, “I took tae kwon do when I was a kid.” And so, they asked me to do like a form to show off my punching and kicking skills. It was really embarrassing. I felt really dumb.

I see on your twitter bio that you love beer. What’s your favorite right now?

Josh Kelly: Well, I go through little phases all the time and I go on a little kick where I crave something more than usual but I always return to my tried-and-true, my love, Bud Light.

Share
Tweet
Pin
Previous ArticleDavid Oyelowo Explains Why He Won’t be The ‘Black Best Friend’
Next Article Actor Bradley Bowen: How I Went From Construction Sites to Movie Sets