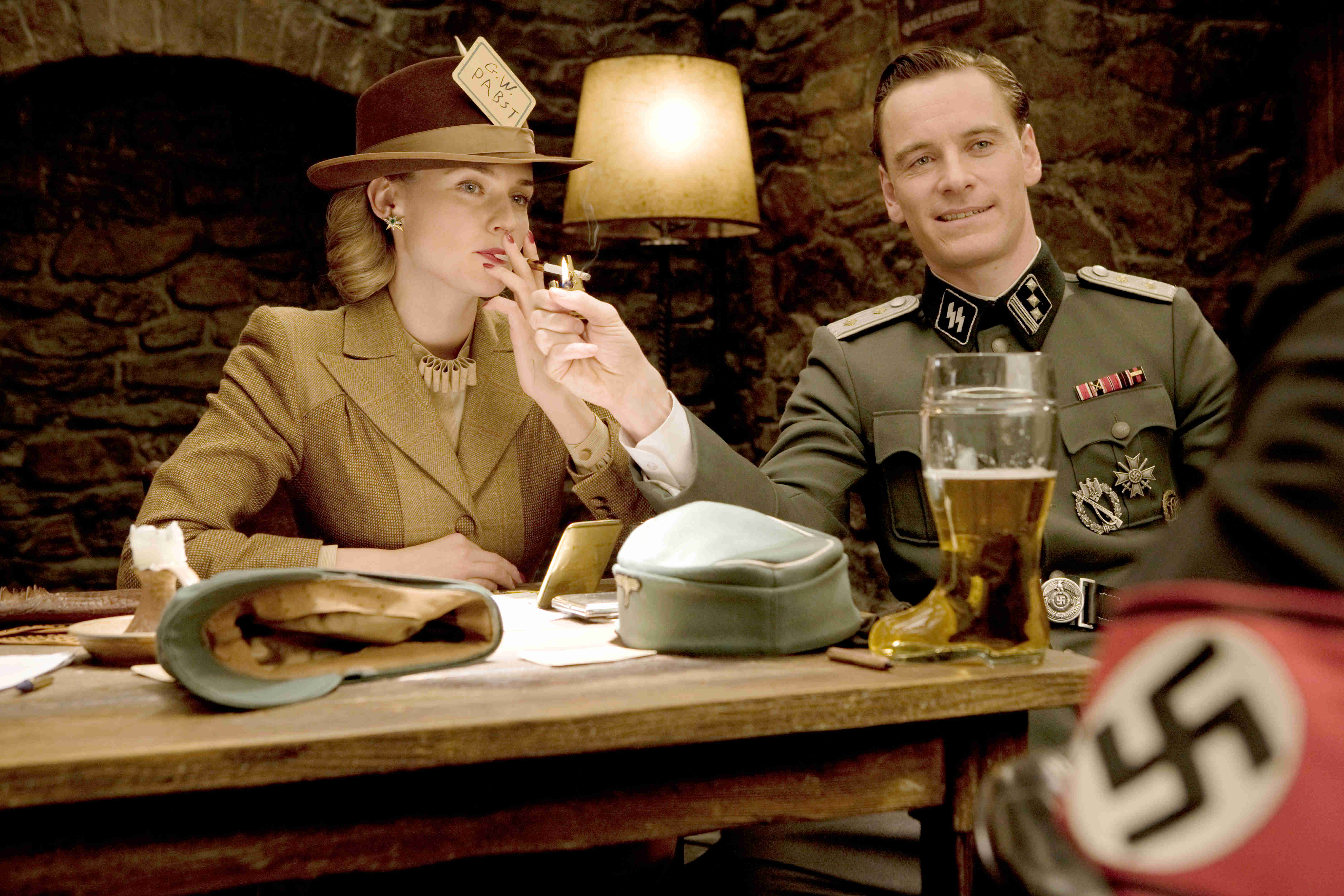 Let’s talk about that voice! That British accent you use as Lt. Archie Hicox is so much fun to listen to — even in the very tense bar basement scene, as soon as you ask to switch from German back to the Queen’s English, I could feel this wave of pure pleasure go through the audience.

I really just tried to enjoy all the textures of it. When I started out, Quentin said, “I see this as sort of a young George Sanders character,” so I sort of got as much material out of him as possible. It was a very particular way of talking that they had back then in the thirties and forties, this thing of really enjoying each word and bringing color and texture to it. I supposed that’s something we’ve kind of lost, that language was seen as a weapon, if you like. I just tried to indulge in that as much as possible without pissing people off in England. I have a place in London, and I was thinking, “Oh s***, how are they gonna respond?” But apparently it went down really well there.

Did you know that Quentin was looking for that George Sanders-type delivery when you went in for the role?

I didn’t really know what way to pitch Hicox because I was really gunning for Landa, actually. [The role was eventually filled by actor Christoph Waltz.] I was working on Fish Tank at the time and I would come home after work and really pour a lot of hours into Landa. There was French to learn, the German section, speaking the German accent in English…I didn’t really get to do a great deal of work on Hicox. They had told me, “Look at Hicox as well,” and I was sort of in denial, I suppose — like, “No, no, no.” So then I arrived, and Quentin was like, “OK, let’s take a look at Hicox” and I was like, “S***!” [Laughs] I was like, “What about Landa?” and he was like, “I cast my Landa on Tuesday.” I went, “Really? Are you sure?” But then, I’m not about to tell Quentin Tarantino how to cast his movies, so I said, “OK, let’s read Hicox.”

What else did you want to incorporate into your performance?

It was the way these movie stars in the thirties and forties carried themselves physically — this very proud presence. I really wanted to take all of that on board and use it to play Hicox, because I saw this certain vanity in him, this very sort of dry delivery. It’s very British, this “Give it a go, old chap?” sensibility when the cards are stacked against you. There’s something very endearing and admirable and comical about it, so I really wanted to try to encapsulate all those things.

Had there ever been an accent that was really difficult for you to learn?

I think all of them can be pretty difficult, do you know what I mean? An American accent comes, I suppose, the most easily in terms of [being]Irish — the sounds and the word formations are pretty much the same. An English accent is actually pretty tricky: The r’s are silent, the vowels are different, sounds are forming in the front of the mouth as opposed to the back. I kind of do it like music as opposed to phonetically; there is a phonetic approach to learning an accent, but I think I was asleep during those classes in drama school.