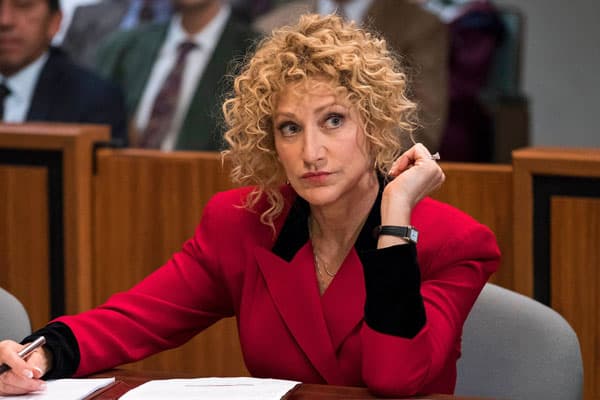 Four-time Emmy Award-winner Edie Falco has been nominated yet again for an Emmy for her performance as real-life defense attorney Leslie Abramson in the miniseries Law & Order True Crime: The Menendez Brothers. In an interview for Gold Derby about her career, Falco spoke about the miniseries and explains why she feels so lucky when it comes to the roles she has been cast in.

Abramson became a controversial figure during the Menendez trial. Falco explains that she tried to understand Abramson’s decisions and character by figuring out her motivation and place in this story. She explains, “It was the same as it is to any character. I just tried to find out what it is that was her through-line in this story, where she was coming from, what did she care about, what was her viewpoint, how did she go about getting her point across, kind of the same thing I would do even if it was a fictional character.”

Falco was able to do research on playing Abramson from reviewing materials from the trial, but reveals that there was less footage of Abramson available than people realize. She says, “There was some video of her speaking to reporters outside the courthouse and stuff like that. It was not of great import to me to do a physical imitation of her, because it was for me more about where she was coming from. You could say, ‘The defense attorney with the curly hair,’ and people go, ‘Oh yeah, I know her.’ But it’s not like they’re so familiar with how she looked and how she walked and how she talked that it was important to imitate that. It’s a very strange thing playing a real person and playing a real person who’s still alive. I wanna have respect for this very difficult chapter she went through in her life. I wanna tread lightly, basically, is what it was. I just wanted to get what she was going for there and understand her point of view. I was able to read lots of stuff including her own book, and get an idea of who she was and what she cared about.”

Interestingly, Falco seems to always be involved in prime projects and has had some remarkable roles. She points out that she sees herself as incredibly lucky, explaining, “I went into this business where I kept hearing, ‘It’s very hard for women. Roles for women are harder to come by.’ I just never found any of that to be true for me, and I feel like I’ve just been blessed in so far as my particular journey in this business, that I’ve been exceedingly lucky to find the roles that I’ve found and to work with the people that I’ve worked with.”

With that said, Falco adds that she doesn’t have a firm idea of what will be a winning role for her. She said, “I don’t have a great idea about, ‘What’s the next best move for my career?’ I’m going on a visceral sense about what is interesting to me. I’m not great at working on stuff that doesn’t actually interest me. So from a totally selfish standpoint, that’s where I was coming from when it came to reading stuff after The Sopranos, and yes, of course it was a little disheartening for a while ‘cause it seemed like there was a lot of stuff that just did not speak to me. When I first read Nurse Jackie, it was very different. It was much darker, but there was something about the character that I really responded to, and it underwent a bunch of changes. You never really know, and once I shot the pilot I thought, ‘I don’t know, will people watch this? Who knows. Who ever knows with this stuff.’ But 10 years on Sopranos and 10 years on Jackie and I’m the luckiest person around.”