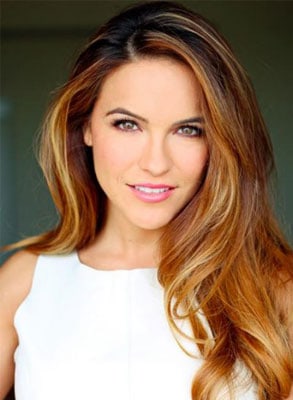 “I was like, ‘I’m not gonna get a four year contract on a soap.’ I wasn’t nervous whatsoever. Of course, don’t you know, that’s the one I booked.” – Chrishell Stause

Chrishell Stause stars alongside her husband, This Is Us star Justin Hartley in the time-traveling film, Another Time. In the film, Hartley plays an investment manager who falls in love with a woman (Stause) who’s company his firm has recently purchased. Engaged to another guy, he realizes the only way he can win her heart is to travel back in time but things don’t work out the way he thinks they will. Stause is funny and charming and it’s fun watching the two banter back and forth.

Stause, a veteran of All My Children and Days of Our Lives, talks about the film and working with Hartley, her early career and her two worst auditions.

Chrishell Stause: Well, my husband actually brought it to me. At this time, he was not my husband. They approached Justin and he’s the one that told me about it. It just sounded like a fun opportunity, to get to work with my man and it really was. We just had a really good time with it.

Does working together make you want to work harder? Trying impress the other person?

Chrishell Stause: Yeah, I think in the best way possible. Yeah, you push each other, because absolutely, you do want to make them proud. I think that’s why you end up having so much fun. Creatively it’s more stimulating, because you are kind of pushing each other.

The film, I totally didn’t see where it was going. It took a really interesting right turn about halfway through. Was that another reason why you wanted to get involved?

Chrishell Stause: Yeah, definitely. I think it was… I felt the same way when I read it. I was like, “Oh.” It’s one of those movies, it doesn’t start sci-fi whatsoever, then it takes your sci-fi twist… But, in kind of like the way Jurassic Park does, where it’s in a contained type of way. Where it’s like, if this was this way and if this was this way. Not like zombies jumping out of the trees. That’s the kind of stuff I really like. It’s like if these circumstances worked out this way, this is how life would be this way, as opposed to full blown sci-fi.

You graduated from Murray State in Kentucky. Did you immediately move to LA after that?

Chrishell Stause: I did actually, yep. I got my degree. I moved to LA. I was in LA for about a year when I got a screen test in New York, which was cool, because I had never been to New York. I thought, “Well, this isn’t gonna be the first job I get.” It took the pressure off of me and I didn’t mess up. That’s what was happening in my auditions, I was getting nervous and messing it up. I was so not nervous, because I knew that that wouldn’t be the first job. I wasn’t getting booked on these simple commercials. I was like, “I’m not gonna get a four year contract on a soap.” I wasn’t nervous whatsoever. Of course, don’t you know, that’s the one I booked.

Chrishell Stause: Yeah. Maybe you have to… There’s some reverse psychology there. If you can play games with your mind, maybe that’s the key.

What were some of your survival jobs that first year? What was your main source of income while you were trying to get started?

Chrishell Stause: When I moved to LA, I was a waitress at Tony Roma’s, slinging ribs. I was hosting a jewelry show on… I think it’s defunct now. It was called USN, Ultimate Shopping Network.

You’ve probably done now, like hundreds of hours of soap work in your career. I’ve talked to a bunch of actors who had been on soaps. They always say it’s the best acting training ever.

Chrishell Stause: 100%. It’s basically like acting boot camp, because the pace that you’re working at, the amount of dialogue that you’re working with. It’s not like you’re getting to feel these scenes out and see where they can go. You really have to do all of that work outside of the set before you hit the set. When you hit the set, you really have to be ready to go. That’s a very grueling schedule, because a lot of times you don’t get home until a certain time. You have to start over and do the whole thing again the next day. Five days of that a week, it’s boot camp for sure, but in the best way. I love it so much. I will always have a love for it, really.

Do you still have that ability to memorize dialogue quickly?

Chrishell Stause: I do. I’m actually working on Days of Our Lives now. They brought me back. It’s a little fast and furious. They threw me in head first. The first day I was there, I had three episodes to film.

Chrishell Stause: In a day. I was like, “Guys…!” You know what? It’s one of those skills. It still instills panic in me, but at the end of the day, I do, for whatever crazy reason, have an ability to memorize very quickly.

Oh, I’m so jealous. Do they actually do three episodes in a whole day or is it just your scenes?

Chrishell Stause: In that instance, it was just my scenes. It wasn’t the full episodes. A lot of times in soaps, to save money, they film that way because it’s cheaper. Say if they have that set lit and ready to go, it’s more economical for them to just shoot that out all at once. Does that make sense? What will air on TV, say in that hospital, courtroom or whatever the set is, it will air over the course of three episodes.

Is it good getting that call to ask you back for the show?

Chrishell Stause: Of course. I loved leaving my character open ended. They’ve really wrote a juicy arc for me. I’ve had nothing but fun with it.

What has been your worst or most embarrassing audition ever?

Chrishell Stause: Oh my god. That’s a great question. My worst or best? I would have to say the best, obviously those are the ones where you get the jobs, right? Some of them now I’ve been lucky enough to get offers because of the jobs I booked. I would say the main one, for All My Children, that was what set me off able to do anything else. I would say that’s my best, because it was the very first thing I ever booked. It was, like I said, a four year contract. That was pretty great.

My worst, which is always the more fun answer, was for Two Broke Girls. I was reading for the pilot. There was some character in there that was really funny. I really loved it. In your head as an actor, you’re like, “Oh, this is so me. I could so do this.” I get in the room. It was the pilot and as you know, the show is wildly successful. I went in and I totally blew it. I dropped my papers on the ground. I got nervous. Instead of just calming down, picking them up, saying, “I’m so sorry, I need to start over”, all of my wits left me. I think I had it in my head that it was such a great pilot. I really liked it. I got really nervous. I dropped the papers. My hand is shaking. I’m picking back up the papers. I just kind of tried to keep in a scene.

It was either that or the roller derby audition for some CSI or something. We had to actually show that we could roller skate on a roller derby thing. I didn’t get that one either.

I’ve done auditions where I say, “Oh, yeah, I can totally ride a horse” or something like that.

Chrishell Stause: Exactly. But this actually bit me in the ass. I said I could skate, which, but of course I could skate. This was on a roller derby rink. I don’t know if it was CSI or one of those. We had to roller skate on one of those rinks that pitched up. Basically, I was a good sport about it. I shook their hands after. I was like, “Well, if you ever need a couples skate, I’m your girl.” I knew that it was not gonna work. I kept falling down.

Another Time is currently streaming everywhere, including Amazon.