Home » Actors on Acting » To Keep Up the Conflict On the Set of ‘Fury’, Logan Lerman and Brad Pitt “Did not talk at all” 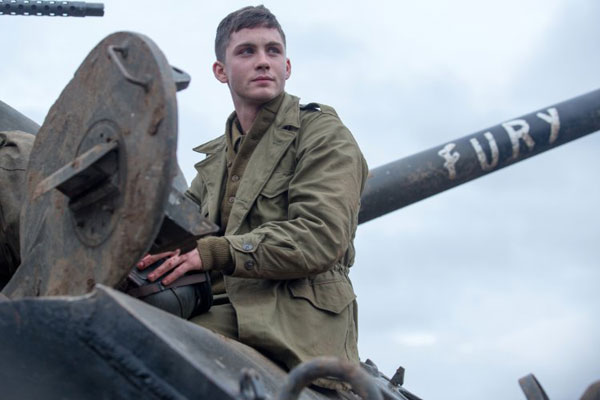 Fury hit the top of the box office last weekend and it’s proven to be a breakout film for actor Logan Lerman. Even though his debut was with Mel Gibson in The Patriot in 2000, this movie has made audiences stand up and take notice.

The film was extremely physical to shoot. In an interview with HitFix, Lerman explained how grueling it was, “It was intense. It was extremely difficult. I can’t say it was a good time but it was a creatively fulfilling time. I think at the end of the day we all felt like we left everything on the table.”

Working with David Ayer was also quite the experience since his sets are not the type of work environment where an actor can coast through a script. He said, “He likes to play psychological games with his actors and really work them and put them through an experience that he cleverly crafts himself. It’s quite a different experience working with a director like him.”

As a young actor, Lerman knew he needed to dedicate himself to the experience and not anything else while he was shooting. “I knew what the movie was and I told him I would commit a hundred percent to his process and I’m his for the whole year,” he said. “So I’m down to do anything he wanted me to do, anyplace he wanted me to go. And I was ready to do it. I was committed. And so I knew what I was getting myself into. It was meant to be challenging. It wasn’t meant — if I was living in Norman’s shoes for the year then, you know, I was expecting it to be uncomfortable.”

The uncomfortable aspect on the set carried over to his relationship with Brad Pitt both on and off-screen. Since there is tension between their characters, they maintained their distance. Lerman shared, “There’s a lot of conflict and we actually did not talk. When we started working we did not talk at all. We kept our distance from each other. We’d go through times where we wouldn’t speak to each other for a week, you know? We would only do our work together, and then we’d butt heads.”

While it wasn’t something that Ayer suggested, it was a device the 22-year-old star used for himself. He said, “I just chose not to communicate with [Brad].”

Share
Tweet
Pin
Previous ArticleQ & A: Andre Braugher on ‘Brooklyn Nine-Nine’: “I’ve sort of committed myself to perfecting the art of the straight man”
Next Article Keanu Reeves Might Be the Star of ‘John Wick’, but It’s an 8-Week-Old Fur Ball Who Steals The Movie