Home » Film » Steve Carell on Why the ‘Anchorman’ Team Works: “We’re very like-minded. We sort of have a shorthand with each other, too” 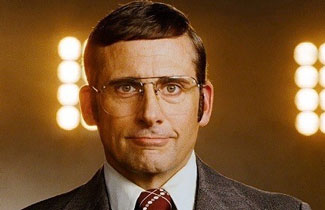 If you haven’t been able to tell from the Ron Burgundy overload on your television and computer, the sequel to the beloved 2004 comedy Anchorman is finally coming out this week.  Because star Will Ferrell isn’t much of a talker in real life, one of the members of Burgundy’s Channel Four news team is doing most of the media rounds — that would be Steve Carell, who plays the mentally challenged weatherman Brick Tamland.

Carell spoke to The New York Post about getting back into the period wardrobe (the sequel is set in 1980) and why his fellow Channel Four news team actors — Ferrell, Paul Rudd, and David Koechner — work so well together.

As most actors will tell you, wardrobe helps tremendously when getting into a period character.  For Carell, it helped put him back in the mindset he had while shooting the first film.  He says, “It definitely brings you right back into the character when you put on those clothes.  Frankly, [my clothes]weren’t as nice as the ones I wore in the movie. I owned a handful of three-piece suits — but most were made of double-knit polyester, not the rich wool that you see in the film.”

Naturally, one of the best things about Anchorman was the chemistry of the Channel Four news team, and Carell points out that the gang works so well together because they have similar mindsets for comedy.  He explains, “One of the great things about working with all these people is that we’re very like-minded. We sort of have a shorthand with each other, too. When one person’s on a roll . . . everyone else knows how to support that and get behind it and be a good ensemble.”

I’m assuming there were plenty of times when one person was “on a roll” — we’ll see for sure when the film (and he inevitable Blu-ray gag reel extras) come out!

Share
Tweet
Pin
Previous ArticleJason Schwartzman on Landing his ‘Saving Mr. Banks’ Role and What Happens When Emma Thompson Gets Mad at You
Next Article How the Cats Were Trained for ‘Inside Llewyn Davis’