Home » Film » Aubrey Plaza on Breaking into the Industry: “I was very delusional” 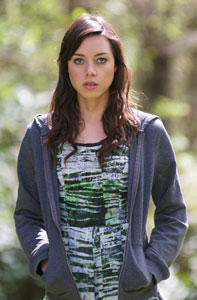 Aubrey Plaza is famous for her deadpan delivery as April Ludgate on NBC’s Parks and Recreation.  The 27-year-old will also be starring in her first leading role in the new indie Safety Not Guaranteed, which will be opening in limited release in June.

In an interview with Vulture, Plaza admitted that her foray into acting was a little unconventional.  At 15, she enrolled at ComedySportz in Philadelphia.  She said, “It was me and a bunch of librarians trying to find themselves.”

She went to NYU for undergraduate studies so she could study at the Upright Citizens Brigade Theatre.  Plaza said, “I was very delusional.  Growing up, I really believed it was going to happen for me.  They say what you put out into the universe comes back to you.  Also, I’m just a crazy person.”

Plaza got her role on Parks and Recreation almost immediately after coming to LA for some meetings.  But she doesn’t necessarily relate to her character.  She finds it strange that “deadpan is, like, my thing.  I was never sarcastic or petulant.  In high school, my superlative wasn’t Most Likely to Hate the World.”

But Plaza has learned to embrace the cynicism she’s become known for.  She said, “There’s definitely an ironic culture that emerged in the past couple of years, and I’m very much a part of that, maybe even a face of it.  So it’s interesting that I’m in a movie that’s combating sarcasm and how everyone’s making fun of everything.”

Share
Tweet
Pin
Previous ArticleTony Hale on Shooting HBO’s ‘Veep’
Next Article Paul Brannigan, an Actor with No Training, is a Star at Cannes… and Did a Nude Scene with Scarlett Johansson