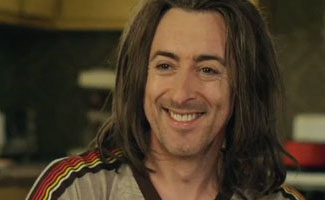 “I was on summer holiday from The Good Wife. I always seem to do the most crazy challenging things on my break,” the Scottish actor said in an interview with The Wall Street Journal.  “Last summer I decided to play all the parts in Macbeth.  The summer before that I did this film.  Maybe next summer I am just going to have a real holiday.”

“When we showed it at Out Fest, an ex-girlfriend of mine said ‘I’ve never seen a film when so much of you comes out.’  That’s something I’ve been trying to do in my career—let people see you even when you’re not being you.  So there’s lots of me in this.”

Another challenge for the actor was perfecting a Queens accent for his character.  “I’ve never done a whole film when I had to have that accent.  I remember when I did Annie with Kathy Bates, I would say [in Queens accent]‘Hey sis, who’s the hot tomato in the fancy car?’  I based that on my friend Carmine.  But this was being so real.  It’s easier to do when it’s a little cartoony.  But this was a real person.  It was much harder.  I watched some films and things.  The Internet is great.  You can get really detailed audio.  I was a little magpie.”

The film, already receiving Oscar buzz, will be released on Friday, December 14.

Share
Tweet
Pin
Previous ArticleFirst Look at ‘Game of Thrones’ Emilia Clarke as Holly Golightly in ‘Truman Capote’s Breakfast at Tiffany’s’
Next Article Dominic West on His Early Film Roles: “I was a disaster”