Home » Actors on Acting » Don Cheadle: “Be scared. Be on the edge of your creativity” 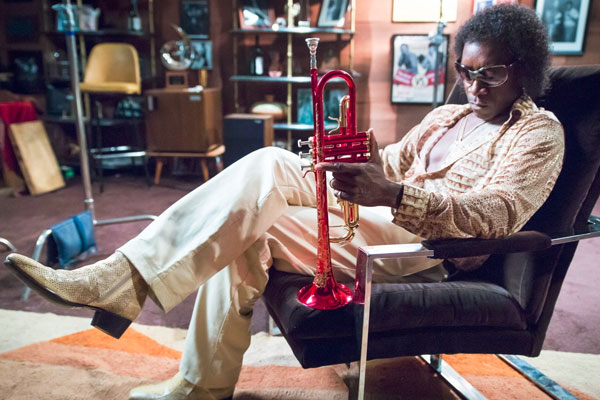 “Be willing to fall flat on your face and be in an unknown place. If you’re doing that, you’re probably growing” – Don Cheadle

Oscar-nominated actor Don Cheadle has appeared in both blockbusters (Iron Man 3) and critically acclaimed films (Hotel Rwanda), and even directed two episodes of his television series, House of Lies. But despite all that success, Cheadle was unable to get his passion project, a biopic of jazz icon Miles Davis, off the ground for a decade. The long-in-the-works project, titled Miles Ahead, finally premiered at last year’s New York Film Festival and is currently opening in theaters. In an interview with the Associated Press, Cheadle talks about some of the challenges he faced in trying to make the movie and what he learned from the long experience.

Growing up, Cheadle played the alto sax and aspired to be a musician of Davis’ caliber. He recalls, “I wanted to be Miles Davis, not depict Miles Davis. I wanted to actually go through the exercises and be in the creative space that he seemed to live his entire life in.”

After a decade of attempting to make Miles Ahead, Cheadle was ready to begin… until he got the call from Marvel to reprise War Machine in Avengers: Age of Ultron, which forced him to miss much of the preproduction of Miles Ahead. However, he has no complaints about being part of the Marvel Cinematic Universe. As he points out, “They’re in first position on everything. I was on that movie before I was on House of Lies. And thank you, Marvel, because it allows me to do all this other stuff, and I like those movies.”

All that time and effort paid off for Cheadle, who is now finally bringing his Davis biopic to theaters. It was a nerve-wracking experience, but one that proved to be fruitful. On what advice he would give to others in his position, Cheadle explains, “That’s so what I wanted to induce from this process and understand and make a part of my process: Be scared. Be on the edge of your creativity. Be willing to fall flat on your face and be in an unknown place. If you’re doing that, you’re probably growing.”

Share
Tweet
Pin
Previous Article‘Vampire Diaries’ Casting Director Cancels Georgia Workshop
Next Article Jake Gyllenhaal on ‘Demolition’, Working with Chris Cooper and Directors Who Want Nothing to Do With Him