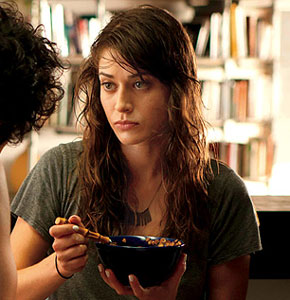 Lizzy Caplan is such a good actress that you might actually believe she’s just like the roles she plays—a somewhat nerdy lawyer on New Girl, a druggie in the film Bachelorette.  But the comedienne is just adept at “finding some similarities between myself and the characters, even if it’s the tiniest thing.”

Caplan told Interview Magazine that “the True Blood character was probably the biggest departure for me, because I’m the opposite of like a vegan hippie chick.  I can’t, I can’t even.  But, in comedy roles I gravitate towards broken girls, and so I can definitely draw some real-life experiences.”

In Caplan’s new project, the television series Masters of Sex, the actress has taken on a role that is the complete opposite of her own personality.  “The show I’m doing next, Masters of Sex, is a drama and takes place in the ‘50s and that is very, very unlike me, how she behaves, there’s a lot of space between her and me in real life,” Caplan noted.  “It’s about Masters and Johnson, the sex researchers in the ‘50s.  It’s their story and their research, but their actual story, I’m very curious to see if people think that we are stretching the truth because the insane stuff in our show is true.”

Although it was the character development in the series that drew Caplan to the part, the actress is also known for selecting projects where she has the chance to work with some of her previous costars.  Caplan starred with Adam Scott on Party Down and Children’s Hospital and Martin Starr on Party Down (again) and Save the Date (which is now out in theaters on limited release.)

“I find that working with friends is always the goal, even if it’s just one person,” Caplan said.  “Because the comedy community is kind of insular, it’s easy to run into people you’ve worked with, even if you worked with someone on something for a day, or whatever.  It just makes it more comfortable.  I feel more confident in being able to be funny if I’m comfortable with the people I’m around.  When you’re friends with them, it just makes it all the better.  Plus, shooting a movie, you’re sitting on your ass for hours at a time, so if you have somebody there to mess around with and have fun, then it’s great.”

Caplan’s ability to choose the right parts has set her on a great career path, especially as an actress who has flexibility between dramatic and comedic roles.  Caplan has remained dedicated to quality work since her days on the cult classic Freaks and Geeks.

“I’ve always been really selective.  I just didn’t have the right to be as selective in other years, I guess.  It’s very difficult to commit so much of your life to go shoot something that you think sucks, so I’d rather do nothing than go work on something that I really hate,” the actress admitted.  “Obviously, there are moments where you have to take jobs for money, everybody needs to pay their rent or whatever.  But now, especially because I have this show waiting for me, I’ve completely relaxed.

“I’ve taken a lot of months off for the first time, really, ever, and I don’t know, it’s nice to do that, I guess?  People like to do that stuff and take vacations?  I’m just excited to go back to work and get going on it.”

The Masters of Sex is set to premiere sometime next year on Showtime.

Previous ArticleKit Harington on His ‘Game of Thrones’ Accent and Favorite Monologues
Next Article Barbra Streisand on ‘The Guilt Trip’, Challenging Herself and How She’s Difficult to Hire