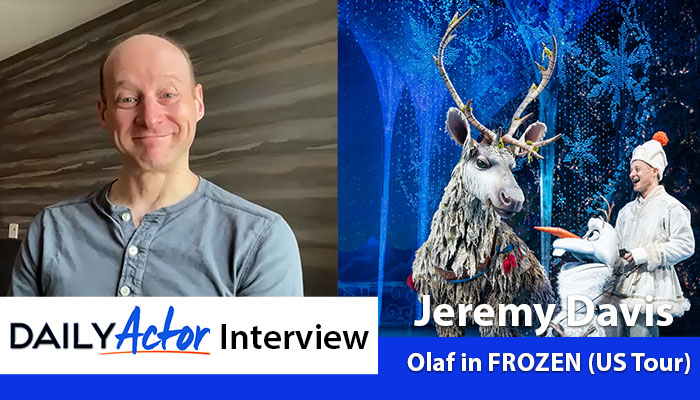 “I love playing this role. It is so, so fun,” Jeremy Davis said recently. That role is Olaf, the scene-stealing snowman that kids and adults love to love, in Disney’s Frozen, which is currently on tour and now playing at the San Diego Civic Theatre. “I come on, I’m shot out of a cannon, and I get to just really eat it up out there, and it’s really fun,” he said.

In this interview, Davis, who’s been with the show in some form since it’s pre-Broadway workshop, talks about the tour, costume mishaps, and how he makes Olaf his own. These are edited excerpts from that conversation. For the full interview, check out the video below or watch it on YouTube.

Most tours are in town for a week and then in the dark at night, they pack up and leave town. Frozen stays for almost 2 weeks?

Jeremy Davis: Yeah, I think our shortest stays are always about nine or 10 days.

Is that just because everyone wants to see it?

When you guys’ load in, what’s the process for the actors? Do you guys have to go in walk through the show?

Jeremy Davis: No. It’s pretty easy for us, the acting company. In a new city, if the show is at 7:30, 8 o’clock, we show up around 2 o’clock, and we have an orientation company meeting where we talk about things that might be different in this house as opposed to other houses or where our dressing rooms are, or just little logistic things like that, and then we have a sound check where our sound people tune the room, and we hear what it sounds like in that particular venue, and then we have the rest of the day off until we come back in for the show. So, for us, for the acting company, it’s really not that hectic. The crew is working really hard.

I would think Olaf is just the best character to play. Everyone loves him. He comes in, chews some scenery and leaves and everybody’s got to pick up the pieces when you’re gone.

Jeremy Davis: Yeah, that’s exactly right. I love this job. I love playing this role. It is so, so fun. It’s amazing to be loved the moment you step on stage, to have everybody be on your side right at the beginning. And you’re right, I come on and I’m shot out of a cannon, and I get to just really eat it up out there, and it’s really fun.

The other thing I really love about him is he has this amazingly positive perspective on the world. He is an undeniable optimist, and in every opportunity, in every experience, he sees an opportunity for having fun and being joyful, and so it’s really just a great gift to be able to play a character like that and to be in that head space all the time.

I’m an actor too, and sometimes you do these roles and I’m thinking, “Oh, I should start doing this in my real life.” Unfortunately, it never happens, but in playing Olaf, where you just explained his life philosophy, does that sort of affect you off stage?

Jeremy Davis: Yes. I have been very, very affected in a truly positive way playing this role and that’s exactly why. I spend so much time portraying positivity and portraying happiness. Behavior, like any other thing, is a skill, and like anything we do in life, the more you do it, the better you get at it. So I’ve had hours and hours and hours and weeks and months of practice at being happy and looking at things as opportunities for happiness and joy and love, and so I do find that bleeding over into my real life. So yeah, this has been a monumentally beautiful experience for me.

You’ve been with the show for a while. I think you first auditioned in 2016?

Jeremy Davis: Yeah. I started as the understudy for Olaf and just recently took over on tour a few months ago, but I’ve been involved in Frozen since the beginning. I did the very first developmental workshop, we did another workshop after that. I was part of the out-of-town tryout, the pre-Broadway tryout we did in Denver. I did the entire Broadway run, and then when the show started opening back up after the pandemic, I came out here on tour.

What was your addition like originally? Did you know anything about puppetry when you started out?

Jeremy Davis: No, I knew nothing. My original audition was just a regular audition. I went in, I sang a song, and then for the understudy stuff, I had to read a couple scenes. But it was really a standard audition, and I didn’t know anything about puppetry.

The first time I had ever done any puppeteering was when I had my first understudy rehearsal and I got into the puppet, and I was depressed because I didn’t think I could do it. It felt very unnatural and heavy, and I sometimes say it felt like I was just pushing around a pile of really heavy rocks. And I was in a deep, deep funk, because I wasn’t sure if I could handle the job.

I have gotten to the point where it feels like we are working together. I know he’s an inanimate object, but a big, big part of my job is to animate him, to make him seem alive, and I often think of him as alive now. I think of him as a partner or a buddy or a dance partner, really. That’s the simplest way to sort of describe my relationship with Olaf, it’s that I feel like we are dancing partners.

I have two little girls and when they hear Josh Gad’s voice, the house goes crazy. If I was going to audition for the role, his voice would be inside my head the whole time. How did you make the role your own?

Jeremy Davis: Yeah, it’s sort of impossible to escape that influence, and I don’t know if I would want to. I don’t make a conscious effort to sound like him or not sound like him, or to take any part of what I know about the character already. I just sort of approach it the way I would approach anything. I go back to basics, I start with my script, I go for my operative words. I do all the nuts-and-bolts things that you do when you work on a role.

But I can’t deny that part of what I do must be influenced by everything that I’ve seen and heard and know about the character already. When I walk out on stage and everybody knows Olaf, they’re not the only people who have known him for a long time. I’ve known him for a long time too before I started working on it. So yeah, I can’t help but be influenced by all that stuff.

You’ve been working on the show and this role for a while now. I know when I do a show for like four weeks or a month and a half, two months, I go back to the script all the time, like, “What the heck am I doing again?” Do you need to do that anymore?

Jeremy Davis: I don’t really go back to my script very much now. After all this time, I could probably dictate the script to you. But I do periodically re-examine my bits and my actions, and I do tend to… I don’t remember who said it, but you’ve got to kill your darlings. I do that every few months, I’ll pick my favorite part of the show that I do every night and change it up.

Jeremy Davis: Well, it sounds brave. It’s more heartbreaking than anything. But what it does is it makes sure that I continue to stay in the moment every night. I can feel myself sometimes getting… After I’ve done something for a while, starting to get into a rhythm of it or starting to sort of fall out of the action of it all.

That just happened to me this past week. I have a really fun bit that I do near the end of the show, and it always gets a great laugh and I love it so much, but I had started to feel myself getting into sort of a pattern with it, that didn’t have anything to do with what was actually going on on stage. And it felt like I was singing an aria as opposed to playing a scene. So, I went back and re-examined it and I was like, “Okay, what’s actually going on here?” And I went back to basics. That’s the kind of work I do. I don’t really open my script anymore because I know the words so well. But I do continually re-examine what I’m doing on stage.

Have you ever had any mishaps with the costume?

Jeremy Davis: I’ve had some near misses. He’s attached to me through this little rod. I have a harness on, and then there’s a rod that hooks into the harness, and then he attaches to that rod. But it locks in with a pin, and my pin sometimes is a little bit dicey, like it sometimes doesn’t exactly want to work. We’re pretty good about knowing if it’s in or not, but there was one time where we thought it was in, and then I got off stage and I sat down and the puppet just fell off. And I thought, “Oh man, I’m so glad that did not happen out on stage.” How traumatizing would that be to all those people?

You’re also on tour with your wife. How did you guys manage to both book the tour? Are you just supremely talented? Did you grease the higher-ups?

Jeremy Davis: Well, we just got lucky. She’s been auditioning for the show for a while, and I had been part of it for a while, and it’s really been a lucky break for us. And it’s one of the most beautiful things about the tour. A tour can sometimes be very difficult because you leave home, you leave everything you love and that you are connected to back somewhere else, and you always find yourself longing for that home. But since we’re out here together, it just feels like we took our home with us. It’s just a beautiful thing. We feel like we live on the road, and I don’t feel that pull at all.

I went in and really, really flopped it. I couldn’t play it; I couldn’t sing it. I got mixed up in the verses and it was so embarrassing. And I finished, and it was just this eerie stillness in the room where they didn’t know what to say and I didn’t know what to say. And they usually… No matter what happens, they always say, “Okay, thank you.” And that’s your cue to leave. But no one said anything because we were all just so horrified at what had happened, and I just said, “Bye,” and hung my head as I walked out.

I’ve tried to do that before. I’ll prepare a new audition song, and maybe two minutes before I go in, I’m like, “You know what? No, I’m just gonna go back to the one I’ve done eight million times.”

Jeremy Davis: You did it the right way. Don’t go the other way where you try to do something brand new at the last minute.

For more info and tickets, check out Broadway San Diego.