Home » Interviews » Interview: Courtney Henggeler on ‘Cobra Kai’, Auditions and How She’s Managed to Have a Long Career 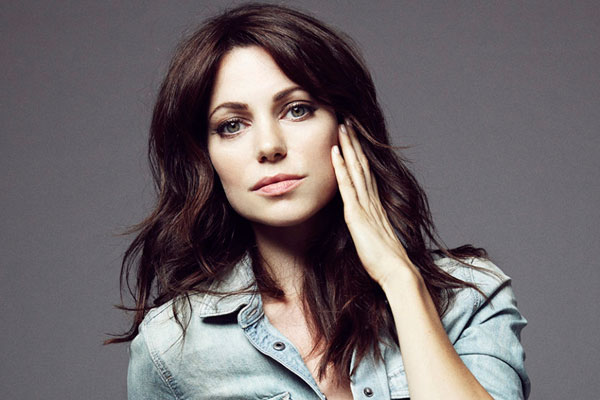 “I never thought I had any impressive career at all. I was just like, you know, just waiting for the next job.” – Courtney Henggeler

If you’re a fan of The Karate Kid movies, get ready to do some binge watching with YouTube Red’s new series, Cobra Kai.  The show brings back original stars Ralph Macchio and William Zabka playing there much-loved (or hated) roles. New to the cast is Courtney Henggeler (Big Bang Theory), who plays Amanda LaRusso, Daniel’s wife.

Courtney, who’s got an extensive and impressive resume, said that she just about to quit acting to focus on writing when she got the audition. After a little prodding from her husband, she went to the audition, booked the part and a week later found herself working with “these idols of mine.”

We’re probably around the same age, so I’m sure like most everyone our age, you’ve probably watched Karate Kid like a million times.

Was it completely surreal to be working with Ralph Macchio and William Zabka?

Courtney Henggeler: Yeah, of course it was. It was very … he was at my screen test and that part was maybe the most surreal because I was like, so taken off guard, and I was nervous enough because I was testing for the show, and then I was like, “What are you doing here? What?” I mean of course he’s here but stop, ahhh! But at the test, he was so lovely and so warm and so nice. He was so easy to laugh. And so, when I booked it, I was just like, “This is gonna be great, he’s so great.” And then I got on set and I’m like, “What the fuck am I doing?”

When you got the audition and found out what and who you were auditioning for, what were you thinking? Like, “Holy crap, they’re rebooting this?”

Courtney Henggeler: Yeah, I mean, at the time that I got the audition, I was quitting acting. I just had my baby and I was like, “I don’t even know if I even want to go back.” I’ve been doing this for so long and I just feel like I was just doing my lateral moves. You know, I was just over it. I was like… uh uh. I was writing, I was pitching shows. So I was like, “I’m just done.” And then my husband was like, “We get our health insurance through your acting, can you just hang in there a little longer until we figure out a plan B?” I was like, “Okay.”

And then like a week later, I got this audition for Karate Kid. And I remember being like this is ridiculous, they’re remaking the Karate Kid? But thinking like how like, “Why aren’t they thinking of original things?” I was all absurd and ridiculous about it. And then I read it and I was like, “Oh, oh this is great. This is gonna be great.” And then of course I auditioned for it, I was just thinking this is just very weird. Like, I had no business being a part of such a huge … the fans are so dedicated and so … I don’t know, they just know so much about the Karate Kid. I felt out of place and I don’t belong with these idols of mine.

In the show, how long have you guys been married?

Did you guys hang out prior to filming or was it just like “Hey, what’s up,” and action?

Courtney Henggeler: Yeah. I booked the job.. I met Ralph at the screen test but that’s all a blur to me because I was terrified.  And then a week later, I got the phone call, “You’re moving to Atlanta in three days. Pack up your family.” There was no time to even think. As soon as we landed in Atlanta, I had to meet with the creators and the rest of the cast to kinda go over everything and start shooting. There really was no time.

And then my husband’s like “You gotta take Ralph out to dinner, you gotta ask him out to dinner so you guys can get to know each other.” I’m like, “I don’t wanna ask. I’m so nervous. I can’t ask Ralph Macchio out to dinner.” I’m the worst socializer.

But then on set, I think we knew we just had to have some sort of back story. We kinda would discuss it between takes and then after you know.

But by episode three, we were just making fun of each other. But yeah it was kinda like get there and now you’re married and now you’re in love. So, figure it out.

What’s she like?  The people who’ve watched this series for all these years, they’ve had to have come with some sort of opinion about what his wife should be like.

Courtney Henggeler:  I remember thinking where we got … they were like, “Yeah, let us figure her out a little bit when we get there.” They were like, “We didn’t know exactly where she was gonna go in this show … or who she was. We just knew that she was gonna kinda be the grounding force for him because he goes on a little bit of journey. Because all the sudden, he’s dragged back in the old drama and old stuff from high school and it kinda like takes him over throughout the season. And she’s kinda the one who’s bringing him back to reality and she’s like, “What are you doing? You’re 50 years old are you really gonna Kung Fu fight this guy you knew in high school?”

This is on YouTube Red. There’s so many more opportunities for actors on TV shows right now, with this and Hulu and Crackle. Have you been getting more auditions for those types of outlets?

Courtney Henggeler: Yeah, I think that’s … actually that’s all I’ve been getting.  Well even when Cobra Kai came to me, I didn’t know what YouTube Red was at the time.

I auditioned for the pilot of Orange is the New Black, which was one of the first Netflix shows, and I remember thinking how ridiculous it was. I was like, “This is for Netflix? That place where you rent movies from? I’m not doing it.” And my agent was like, “You’re an idiot. This is the next thing.” And obviously I did not get Orange is the New Black. It was the wave of the future.

I auditioned for two different amazing series for Facebook that have like Elizabeth Olson attached to it. You know what I’m saying? Everybody has their own streaming thing so I don’t judge anything now.

Steven Soderbergh just made Unsane with his iPhone.

Courtney Henggeler: It is the future. It’s changed everything about how we operate. There’s not even … there’s no pilot season anymore. I mean, there is, but not really.

You’ve got a pretty extensive resume. How have you managed to stick around and build a really nice career, when others who maybe started at the same time have faded away?

Courtney Henggeler: I never thought I had any impressive career at all. I was just like, you know, just waiting for the next job.

I’ve always known since … this is gonna sound so cheesy, but ever since I was a wee little girl, this is what I was supposed to do with my life. I think that I didn’t grow up with anybody who was in the business or knew anything about acting or production.  I think trial and error kind of kept me going.

I got lucky when I first moved out to Los Angeles. I booked a lot of work right off the bat. I booked a bunch of commercials, and I got a couple co-stars and I was like, “Oh this is easy.” But not really having the proper training underneath to sustain anything.

So, then I had to take some steps back and go back and start to study and work on that and then I would have a little more momentum and book more things. And then I’d realized whatever I was working with then, whatever I was studying kind of got stale to me and I would have to keep re-doing it and find a new class. I think how I managed to hang around.

Also my manager, who I met when I was bartending my first year out in L.A., which sounds creepy, but he wasn’t, he stuck with me. He’s been with me for the last 15 years.

What was your worst survival job?

Courtney Henggeler: The only thing I’ve ever done to really survive was bartending. And it depended on the place if it was the worst. I’ve done some night clubs that were just truly awful, awful places. Awful Hollywood. Just awful people. Sometimes bartending was great, I’d work at great places, but I hope to never ever have to go back to bartending, if that makes any sense.

Courtney Henggeler:  I feel like there’s so many of them, hold on give me a second…  When I get nervous, I don’t think before I speak. It was one of my first auditions. I’ve had plenty of bad auditions up until now, but it was one of my first producer sessions and I remember thinking, that was huge.

Tori Spelling had a show called… I don’t even know what it was called, it was back in like 2004. She was auditioning for someone to play her best friend, I went to the audition. They were like, “Can you come back for the producer session?”

I was like, “I’m going to producer session, this is so sweet!” And I got there, and Tori Spelling was there, and you would’ve thought it was Jesus Christ sitting in front of me. I was so nervous and my hands just started shaking, I couldn’t stop. I’m holding the paper… I’m doing it right now, you can’t see me… and I couldn’t even hold my sides.  And I remember the casting director looking appalled. And Tori Spelling was like, “It’s okay.” Any way I blew that audition. It was terrible. It was all a big fog. I left thinking, “Damn it, I embarrassed myself in front of Tori Spelling.” And so that’s the one that comes to mind right now.