Glenn Close has headlined the critically acclaimed original legal thriller, “Damages,” on FX for three seasons. The drama has moved to Direct TV for this its fourth season, with all new episodes. For her riveting portrayal of high-stakes litigator ‘Patty Hewes’, Glenn was nominated for a 2010 Emmy Award and won two consecutive Emmys as Best Actress in a Drama Series for Damages’ first two seasons. For the show’s 2009 premiere season, she won a Golden Globe Award in addition to the Emmy and received a SAG nomination. She was also nominated for a 2010 Golden Globe and SAG Award. Prior to “Damages,” Close won rave reviews and an Emmy nomination for her portrayal of Captain Monica Rawling in a season-long story arc on FX’s “The Shield.”

Glenn Close made her feature film debut in George Roy Hill’s The World According to Garp. Her performance in the film earned her awards from the Los Angeles Film Critics Association and the National Board of Review as well as her first Academy Award nomination. She was subsequently Oscar-nominated for her performances in Lawrence Kasdan’s The Big Chill; Barry Levinson’s The Natural; Adrian Lyne’s smash Fatal Attraction; and Stephen Frears’ Dangerous Liaisons (for which she was also a BAFTA Award nominee).

Close’s ten Golden Globe Award nominations include a win for Best Actress in a Mini-Series or Motion Picture for Television for her performance in Andrei Konchalovsky’s adaptation of “The Lion in Winter” (which also earned her a SAG Award).

For her portrayal of Norma Desmond in Andrew Lloyd Webber’s musical Sunset Boulevard, Close won a Tony Award, a Drama Desk Award, a Los Angeles Drama Critics Circle Award and a Dramalogue Award. She would later reteam with the show’s director, Trevor Nunn, in London for his Royal National Theatre revival of A Streetcar Named Desire.

Previous ArticleChristopher Heyerdahl Interview: ‘Hell On Wheels’ and Acting in Two TV Shows at the Same Time
Next Article Jean Dujardin Considered Passing on ‘The Artist’: “I hesitated, and I even said no. I had some angst about it” 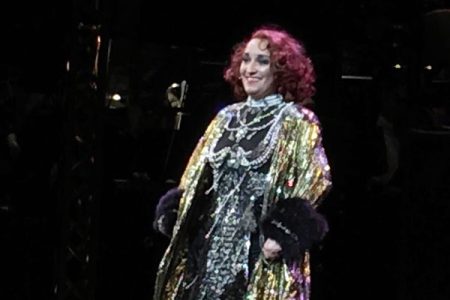 After Getting Boos From the Audience, Glenn Close’s ‘Sunset Boulevard’ Understudy Ends with a Standing Ovation