Home » Actors on Acting » Amanda Seyfried on Playing Cosette in ‘Les Miz’: “It’s like a dream” 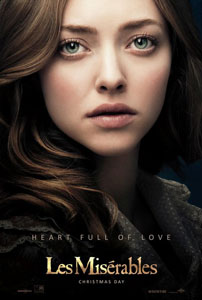 Now that the screen version of the blockbuster musical Les Miserables has finally finished the casting process, actress Amanda Seyfried is psyched to talk about her new role.  In an interview with Access Hollywood, Seyfried said, “It’s like a dream.  I can’t even believe I’m playing Cosette!”

Although Seyfried reached mainstream audiences singing in Mamma Mia, she recognizes that some critics might think she’s not suitable for the challenging role.  She said, “I trained for four months before I got [the role.]  It’s classical music, it’s completely a different animal [than pop music.]  It’s really hard.  You can’t just take any pop star and turn them into a classical singer.  Luckily, I had that foundation as a teenager.  I studied opera.  I’m not the greatest singer, but I’m trying!”

It’s true that Seyfried has a special connection the musical, which will also star Hugh Jackman, Russell Crowe, Anne Hathaway and Helena Bonham Carter.  “This is my all-time favorite musical, hand down.  I fell in love with it when I was 11 and first saw it.  I know every lyric, I know every song.  I was Eponine from 11 to 15 in my head.  When I was 15, I got into classical music and I was playing Cosette in recitals.”

Because of this familiarity with the material, Seyfried is more than ready for the task ahead.  She said, “When we all sing, ‘One More Day,’ I honestly don’t know how I’m not going to cry!  It’s so intense.  It was like half my life that I dreamed about this and never had any expectations of it coming true.”