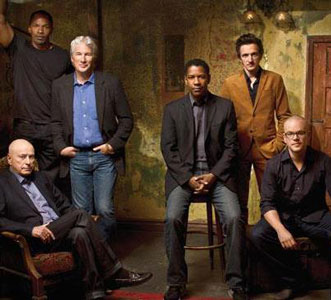 In this hour long, uncensored video, THR got Alan Arkin, Jamie Foxx, Richard Gere, Denzel Washington, John Hawkes and Matt Damon where they talk about their careers, advice to upcoming actors and a ton more. Alan Arkin knows more than most about how bizarre Hollywood can be. The Oscar-winner has been in the business for decades, which made him uniquely able to effectively play movie producer Lester Siegel in the new film Argo. Talk about being (unfortunately) timely: Ben Affleck’s latest film Argo, which he directed and also stars, focuses on a real-life story about the 1979 Iranian hostage crisis, and currently the U.S. is facing similar tensions in the Middle East. It is also perhaps Affleck’s most acclaimed film, which is a tremendous accomplishment considering his two prior films, Gone Baby Gone and The Town, were also well received.