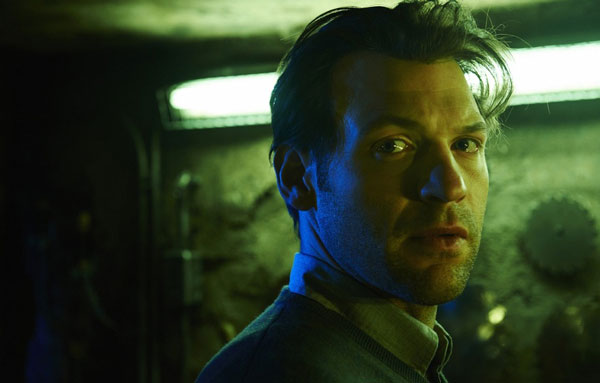 One of actor Corey Stoll‘s best-known recent roles was portraying a pitch-perfect Ernest Hemingway in Woody Allen‘s Midnight in Paris with a full head of hair. Of course, those who have seen Stoll in other work probably know that his actual hairline is more Mr. Clean than Papa Hemingway. Viewers of Guillermo del Toro‘s The Strain, the FX series that Stoll stars in, have even pointed out how his thick hairpiece for the show is a bit overboard. In an interview with Vulture, Stoll spoke about his resistance to wearing the rug for the series and how it has since become key to getting into his character.

Stoll recalls that he was initially against the idea of wearing a wig for The Strain. He says, “For somebody who is follicle-ly challenged, I spent a lot of time talking about hair. At first, when I heard [del Toro]wanted me to have a wig, I was resistant. I didn’t want the reason to be so I could look like a standard TV guy or a hero. Then that points to a bigger problem. I’m not interested in playing that character. I made a choice in my career to not get hair plugs and not hide the fact that I was balding, and I’ve managed to play all sorts of characters who have shaved heads. But Guillermo’s reasoning was so well thought-out. It isn’t arbitrary. It isn’t, I want you to look better.”

However, Stoll has since realized how the hairpiece has helped him get into character. He explains, “But now it’s part of the character for me. It’s the mask. I’m able to access something different wearing that wig than without it.”

Share
Tweet
Pin
Previous ArticleInterview: Acting Coach Paul Kampf on Knowing Yourself, Audition Preparation and Finding the Right Teacher
Next Article Benedict Cumberbatch on Playing Geniuses: “Brilliant people have private moments of self-doubt and things which we could all relate to”