Home » News » 2 Things You Want To Know About Tilda Swinton

The actual title of the article is 13 Things You Want To Know About Tilda Swinton but only these two were of interest for this site.

Check out the other 11 here via indiewire 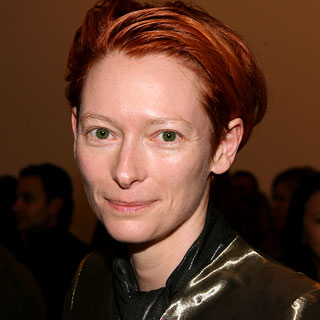 8. Derek Jarman is the reason she’s working today (you probably figured that too, but it’s always worth mentioning).

“I really don’t believe I would be performing in films if I hadn’t met [Derek],” Swinton said. “When I first met him… I was a writer, who should have gone to art school, who went to university, stopped writing, wanted to find film, couldn’t find film, worked in the theater, was alienated by the theater… I was completely what they would call ‘bleeped’ [she motions to the screen behind her, which had recently played a clip of ‘Julia’ that was essentially 50% bleeped ‘fuck’s]. When I met Derek Jarman, he gave me this place to go to, because I knew I didn’t want to be a proper actor. I knew I didn’t want to work in theater or on television or industrial cinema.”

11. According to her, she doesn’t know one thing about acting.

“There’s this endless disclaimer that I always feel I honestly have to give about not being an actor,” she said in all seriousness. “Because it really does feel most honest. I always feel that real actors are going to stand up and say ‘you’re a fraud! Confess it!’ And I want to be the first to say that I never pretended to be anything else. I always pretended to be a film fan first, and an artist’s model second. I’m in front of a camera, because I’m curious, and that’s about it. I don’t know one thing about acting.”

Share
Tweet
Pin
Previous ArticleHave You Heard of “The Way”?
Next Article 10 Questions To Ask Yourself When Building A Character