I started out as an actor and I’m still take acting classes because I find it inspires my writing. Over the last few years, enough acting peers have asked me for advice regarding writing that I started the Actor’s Writing Gym, which provides workshops and classes for actors on how to write their own material.

Actors often tell me about an idea they think would make a great story. When I urge actors to go write it, many times I’m greeted by a dumbfounded expression – you would think I was urging some of these folks out of a plane without a parachute. I’m usually also met with excuses like… “I’m still looking into classes right now…” or “ But I don’t know where to start,” or even “I won’t do it justice, why don’t you just write it for me?” My response to these excuses is always the same: snap out of it and just go do it!

A rather clever excuse. If the actor did go to a class and started writing, it would be different. But usually this statement is merely a ploy used to buy the actor more time. How do I know? Because I use it all the time. Usually I say something like… “I will, but I’m still doing research on this particular fill-in-the blank thing.” I then wave my massive book around like it’s a magical talisman that can save me…but from what exactly? It’s important to remember that if you never go for it, you will never fail, but neither will you reap the rewards of great success. So put away this article and any other excuses and write already.

“But I don’t know where to start.”

Great! This is actually better than knowing where you should start. It takes the judgment off of the writing. I tell my students to start writing from their excitement. Is there a line, image, or character you can’t get out of your head? Whatever excites you about your story is where you should begin. There is no rule that states you have to start your story from the beginning. Once you start writing from your excitement, the rest will come. Eventually the structure will take on a life of its own, and you’ll end up with a beginning, middle, and an end.

“I won’t do it justice, why can’t you just write it for me?”

Here’s a big secret that I wish more people knew about writing: even people like me, who have been writing for years, write crappy first drafts. Yes, I dare say it: crappy writing is part of my process. Nothing I have ever written has come out of me with sparkles. In order to succeed, most of us have to embrace this first ugly step. A big component of writing is trial and error. Before we can see what does or doesn’t work, we must first have some words on the page. Simple concept, right? I not only embrace the ugly draft, I adore my ugly baby; it liberates me. It is in this step that I have the opportunity to explore without judgment; it’s my time to think outside of the box. Plus, no one has to see these first pages but me. The more one works with the ugly, the more the ugly transforms. You’ll find beauty in your words… if you write them down. 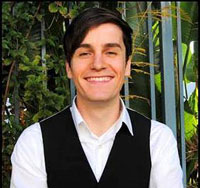 Jeremy Frazier graduated from Carnegie Mellon with a MFA in Drama Writing. He is the recipient of the Max K. Lerner Playwriting Fellowship and the Shubert Playwriting Fellowship. He was also a finalist for the John Cauble Award at the Kennedy Center for his one-act play, We’ll Always Have Paris. Jeremy was recently named as a quarter-finalist for the PAGE International Screenwriting Awards competition for his feature screenplay, Of Flesh and Blood. As the founder of the Actor’s Writing Gym, he loves working with actors to help them create their dream roles and believes that actors make the best writers.