Home » How To Become An Actor 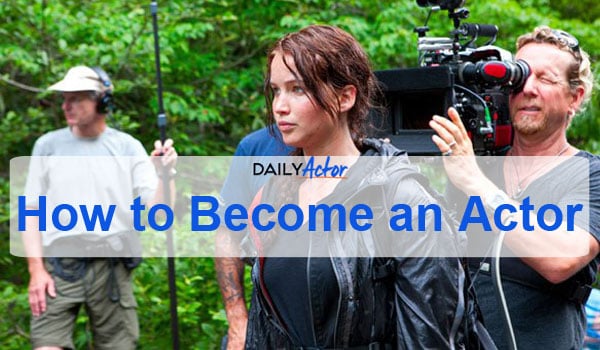 You want to learn how to become an actor? Join the club! Most everyone at one time or another has probably thought about becoming an actor. They watch their favorite shows and movies and think, “I can do that!” They think it’s easy and glamorous.

But what most people don’t realize is that it’s a lot of hard work. It’s a huge amount of fun but it’s work!

It takes a special kind of person to want to become an actor in Hollywood, New York or anywhere in between. They have to be determined, unafraid of rejection and willing to work hard to consistently get better at their craft.

This isn’t a site to learn how to become famous. This isn’t about becoming a star because odds are, you won’t. Hopefully, you’re here because you want to learn how to be the best actor you can be. Whether you’re in Los Angeles or New York, Ohio or Colorado or anywhere in the United States (and beyond!), you absolutely can have a career in the performing arts.

One thing aspiring actors should know from the start is that being an actor is expensive. You’ll need money for headshots, headshot reproduction and acting classes. Eventually, you’ll need to market yourself with a website and a demo reel. You’ll also need to add your material to casting websites. It’s definitely not cheap!

So, if you’re looking for steps on how to get into acting, you’ve come to the right place.

The Basics: How to Become an Actress or Actor

If you’re thinking about breaking into acting, one of the first things you’ll need is a headshot. This is not the place to skimp and be cheap because this is your calling card. If you submit an awful headshot, 99% of the time it’ll be filed away in the trashcan. Having a picture that isn’t professional automatically shows casting directors, talent agents and directors that you’re not serious about your acting career.

Your headshot needs to be shot by a professional and needs to look like you. Seriously, I can’t count how many times a casting director has told me that they’ve called in an actor for an audition and they either look 10 years older in person or that their picture was so photo-shopped that they had to do a double take. Your headshot must look like you, not what you want to look like.

What’s the cost? For New York and L.A., paying $400 to $600 for a headshot session is the norm. Obviously, if you live outside of these cities, you should pay less.

The next thing you’ll need is an acting resume.

This isn’t like a resume you’d give to someone when you’re applying for a “normal” job. An acting resume is totally different.

“I’m just starting out and have nothing to put on my resume!” I’ve heard that before and don’t worry: everyone has to start somewhere. You can easily fix that! Audition for something at your school or local Community Theatre, Church. Look for a nearby Dinner Theater or if you’re in school, join the drama club. And most likely, someone at a local college is looking for actors for their student film. There are probably lots of opportunities near you!

If there isn’t a role for you in an upcoming show, ask if you can help out. Theaters always need a good, responsible volunteer. This will get you in with the theater community and make it tons easier when you actually do audition. They’ll already know you, so it’ll be easier for them to take a chance on you!

All of these things can be listed on your resume. You can even list any acting classes you’ve taken.

I’m sure there is some kind of acting class, acting program or even an acting coach near you. I grew up in a small town and there were at least 5 acting classes within 20 minutes of where I lived.

If you’re still in school, try and find a summer acting camp. Usually, these are all day workshops that take place Monday – Friday. You’ll learn tons and walk away a much better actor. Plus, these are great places to meet people who are into the same things as you!

There are a bunch of great schools you can choose for acting. You’ll be immersed in all things acting so how can you not improve? You’ll learn everything from movement, costumes, theater history, acting styles and techniques and best of all, you’ll be performing constantly.

I went to college in Baltimore, Maryland and loved my time there. I met some wonderful teachers and made some great friends that I still keep in touch with to this day.

Like I said in the resume section, auditioning for Community Theater is a wonderful way to get started. I did a handful of musicals for my local Community Theater when I was in high school and I loved every minute of it. Plus, I learned a lot in the process.

you’ll most likely start off as an ensemble member of a large cast (every town does Oklahoma or another huge production at least once a year). By getting involved, you’ll get to know the local theater companies and the people involved. The more they get to know you, they easier it’ll be to get a part in one of the upcoming shows – especially if you’re starting off as an actor with no experience.

Audition as much as you can. Audition even if you don’t want the part. The more you audition, the better you’ll be. Learn to love auditioning because chances are, that’s all you be doing the first couple years once you have decided start acting.

Start Your Own Play Reading Group

Get a couple of friends together once every couple of weeks and read a play. Give yourself the lead role!  The star of Beautiful Creatures and Solo: A Star Wars Story, Alden Ehrenreich does exactly that. When I interviewed him, he said, “Just invite friends over to read a play. Like, me and my friends do that a lot and it just… it promotes that energy and that energy only builds, but you have to get the… you have to start the engine.”

Don’t know what to start off with? Try something from Christopher Durang or Martin McDonaugh. Or, check out a play that’s been running on Broadway.

At some point, you’ll want to start looking for an agent. Do you have to have one? No, not at all. Especially if you’re not a member of any of the acting unions, SAG-AFTRA or Equity or live outside of any major city.

Will You Need a Manager?

Odds are you won’t. You’ll only need a manager when you have a career that actually needs to be managed. Typically, managers get 20% of what you’ve made per acting job. That’s a lot of money to give to someone when you’re only working a couple times a year.

Column: How To Spot a Fake Manager

How do you find acting auditions and open casting calls? If you’re not in LA or NYC, check your local paper or their website. Google – auditions ‘my city’ – and something will show up. Also, check out Actors Access or call your local SAG-AFTRA office. Most either have hotlines or audition information listed on their site. That’s how I found out about the audition that got me my SAG card.

Also, take a look at our Casting Websites article and our acting advice columns

Acting is a Business

When you’re called in for an audition, be prepared. Know your scene, monologue or your song. Come with your headshot and resume (stapled together!). Be professional. You might only have one shot with that casting director. Make it the best and show them you have the goods!

Casting directors, directors and anyone who can hire you want to know that you are the answer to their casting “problem”. They need you and they want you to be great! They are rooting for you.

Keep Up With What is Happening in the Entertainment Industry

Don’t go into this blind. Nothing irritates me more than meeting an actor who doesn’t watch TV or isn’t up to date on what is going on in film, TV or theater. This is your job!

My favorites are The Hollywood Reporter and Variety for film and TV news. Backstage is good as well. And of course, Daily Actor, with our actor interviews and articles where actors talk about the craft of acting.

And be sure to check out our Acting Tips, Interviews with Actors and Actors on Acting pages!

I did my first play in elementary school, kept that going through high school and then started to do shows at my local community theater. When I went to college, I moved onto Dinner Theater and found other theater companies to work with. While I was doing that, I auditioned for an industrial film, got the part and was lucky enough to get my SAG card. I’ve been acting for years and I’ve loved every minute of it.